dining room before and after

ok, well i'm nesting. i have this week to load up some files of before and afters of the house because once the babe comes, we all know that i'm going to be doing a whole lotta nothing. well, a whole lot of watching shows in the middle of the night while relearning how to nurse a babe. i forget all the things when it comes to having children. you'd think i'd know more but i feel like i may know less about mothering with each child.
so basically, if my theory is correct,  the duggar lady is a complete idiot. jay kay. i actually have a small obsession with the duggars because. ummm, i have no explanation. but i enjoy watching them be weird with their rules and i guess it makes me feel sort of normal.

let's talk dining rooms, shall we?

here's what she looked like before. this was, by far, the lightest and brightest room in the house. that brass chandi was changed out before we moved in, otherwise, i would have kept it. you know i'm into brass now. it's a healthy obsession at this point but just give me some time. #hoarder 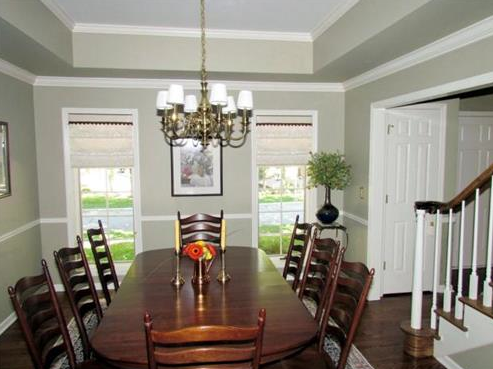 and after, this is sort of the same angle. 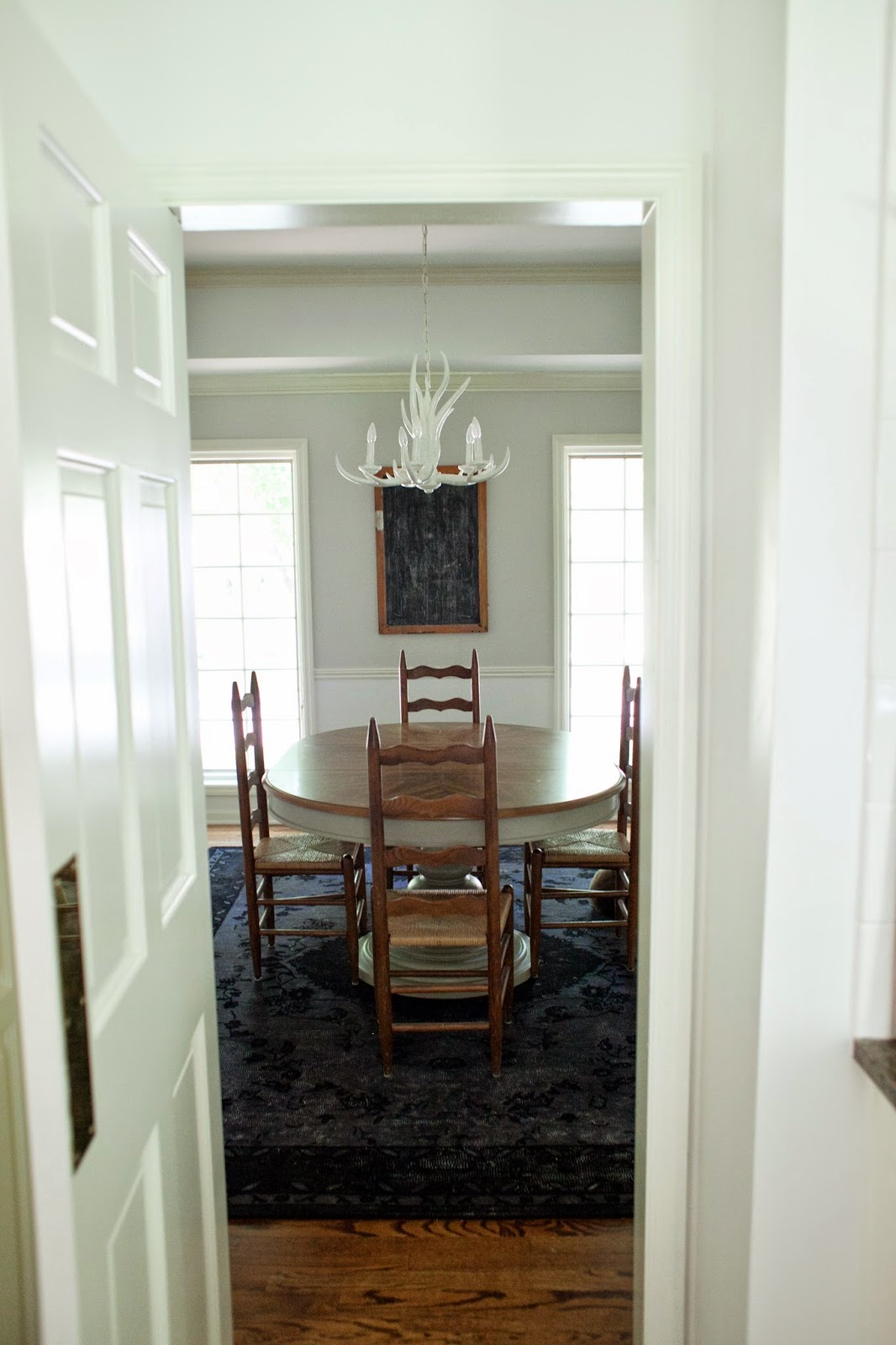 the matching built-in buffets were sort of a reddish oak. i'd like to remove them altogether, but for now, white paint to the rescue. 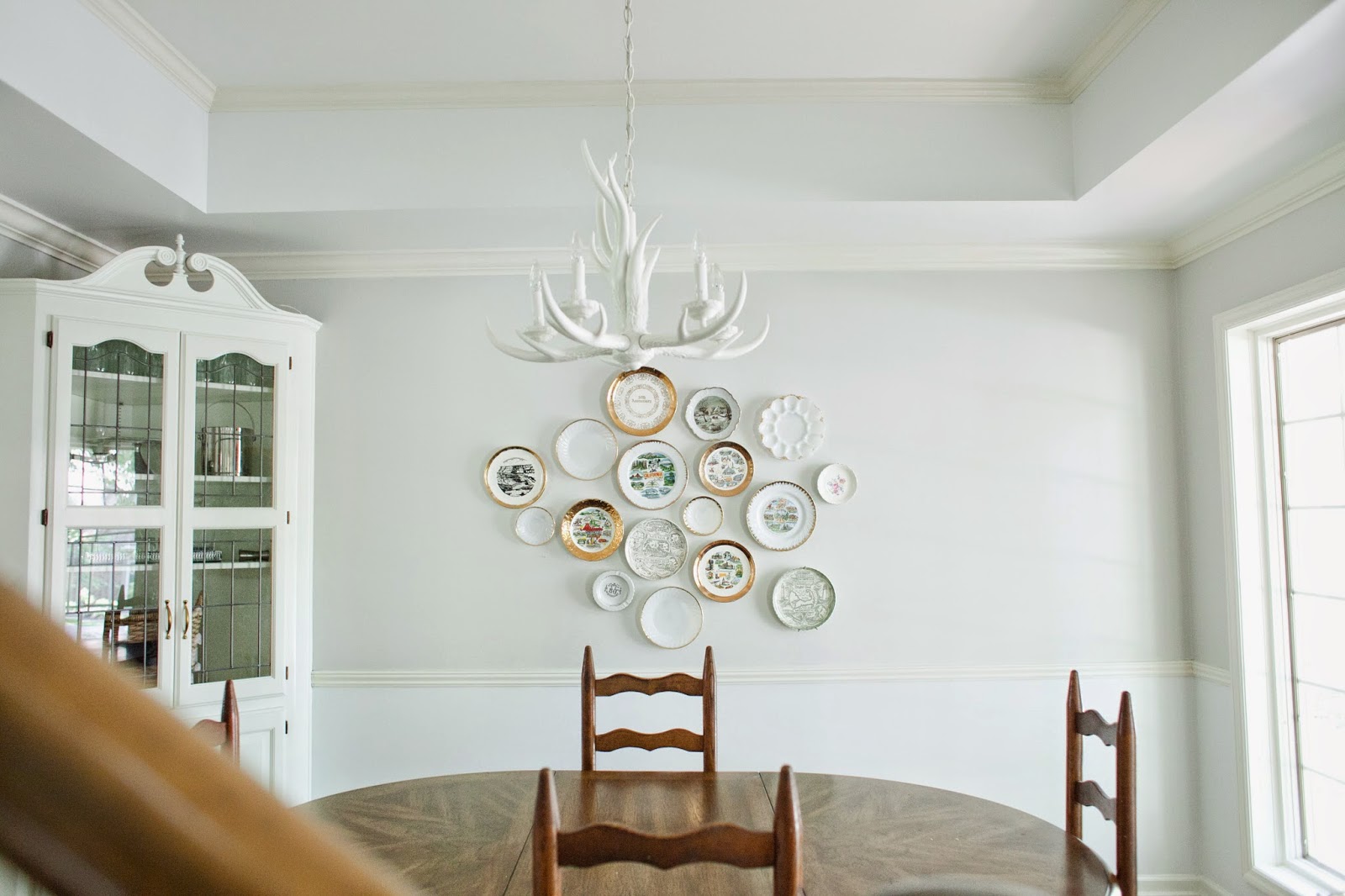 paint color on top of the chair rail: owl grey (or is it grey owl?) from benjamin moore 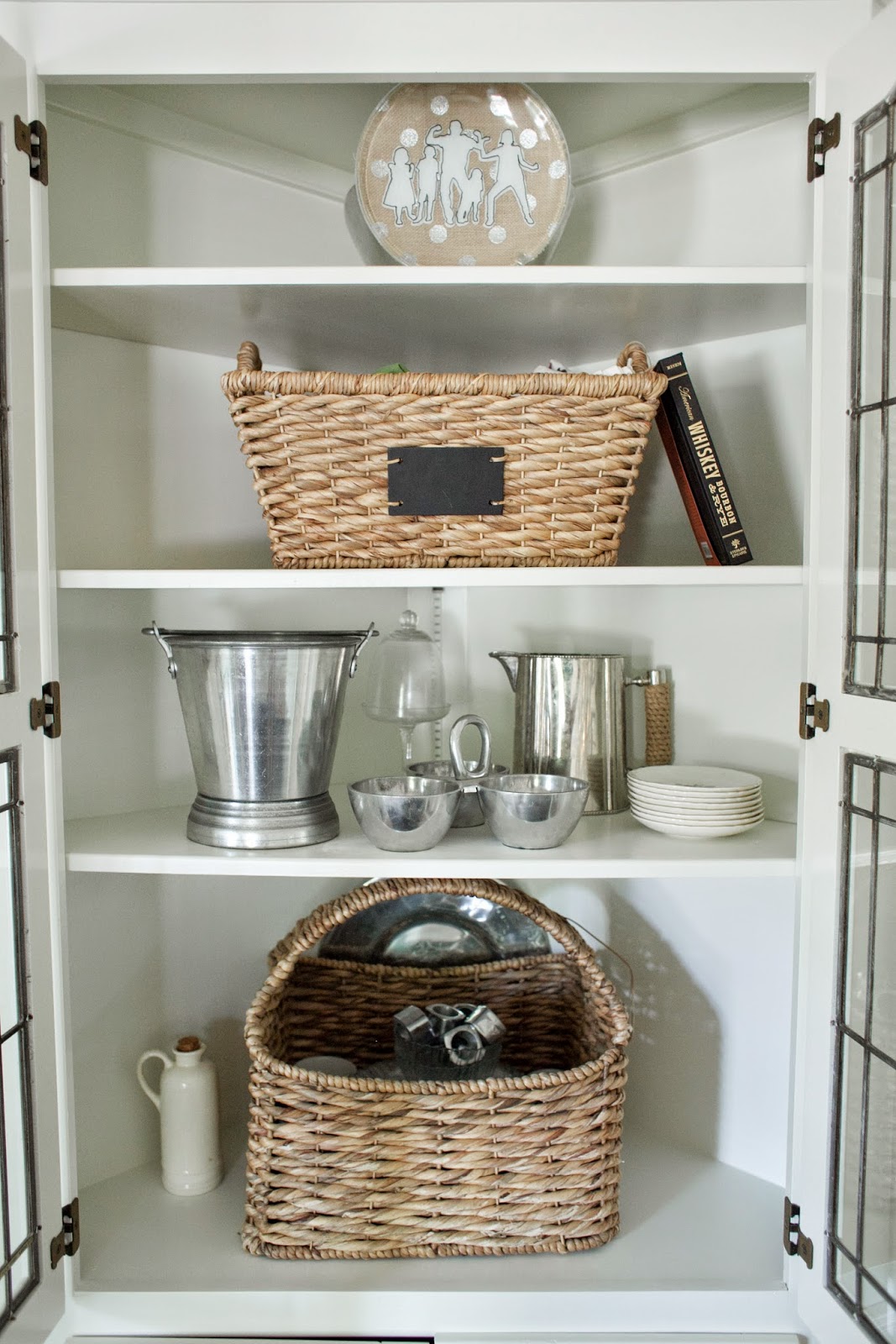 inside the shelves, i just kept it monochromatic with collections of stuff i already had. lots of silver, white dish wear and baskets.

i wanted some antlers in my house with a modern twist. but why are they so expensive. annoying. you found that on a hike, you should just give it to me. but home depot had one that was cheapola, considering i don't hike and i don't know how to wire real antlers into a light fixture. it was faux painted deluxe. and the closer you look, the more hilarious the faux paint looks.
so we painted it white. i considered painting the tips gold and might still do that. maybe since i can't sleep at night. but i'm sorta loving the simplicity of it. 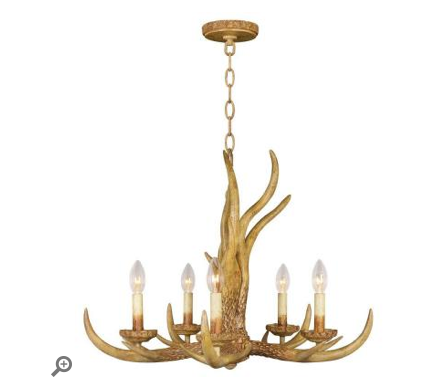 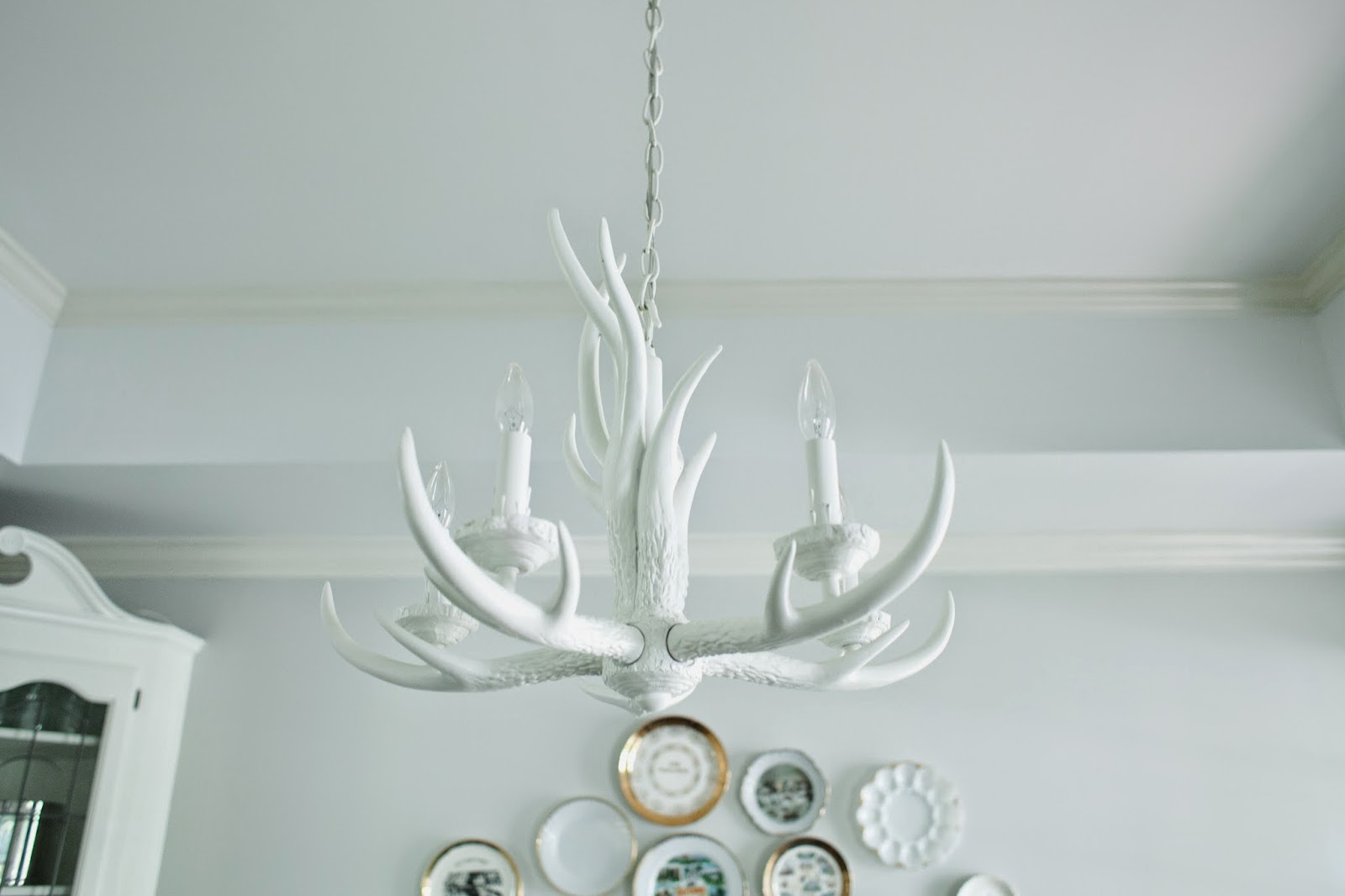 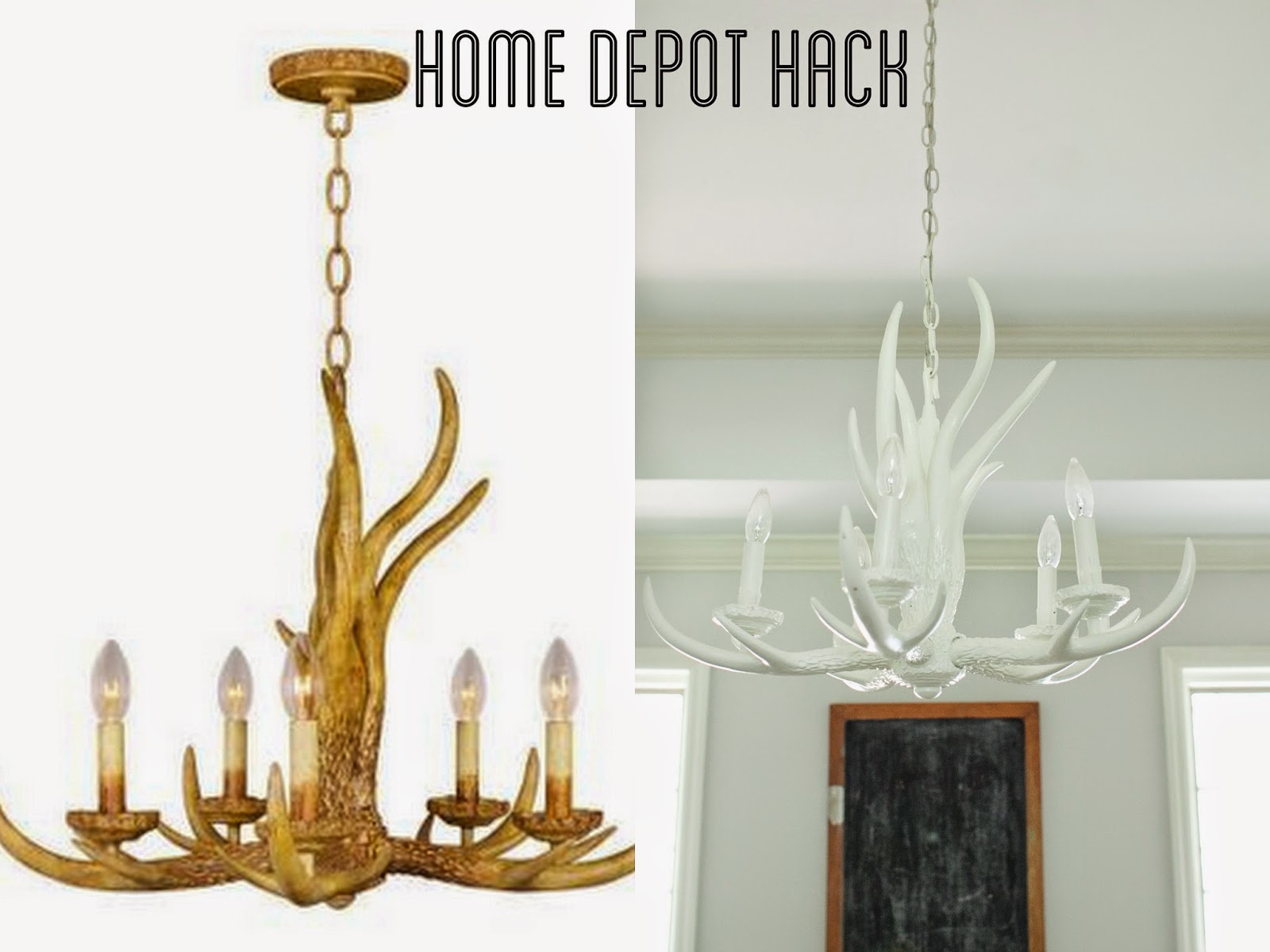 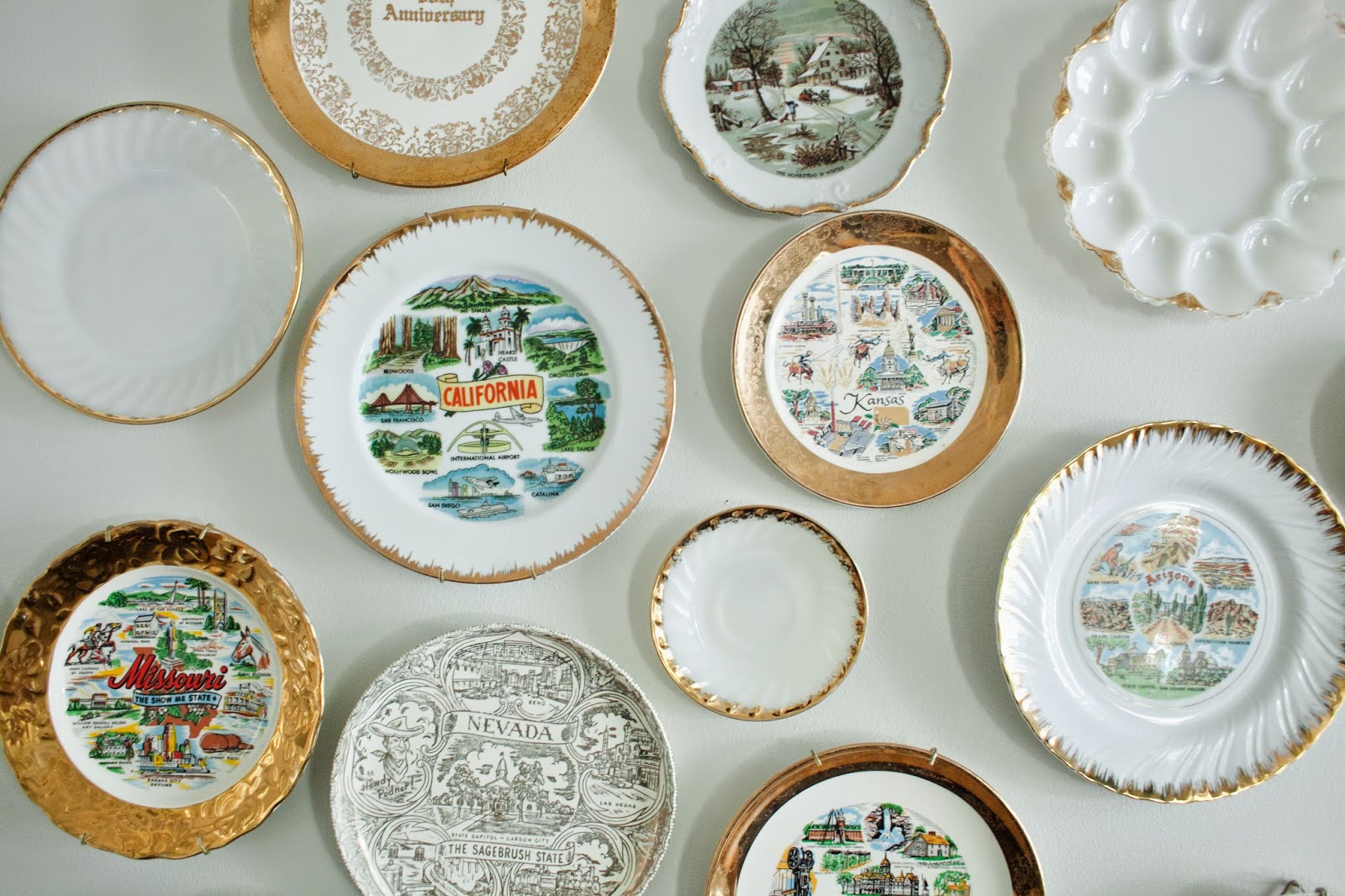 thank you various thrift stores for the plates. usually a buck a piece.
and some are hung with plate holders, and a lot are hung with string, looped and hot glued to the back, then reinforced with some super glue. 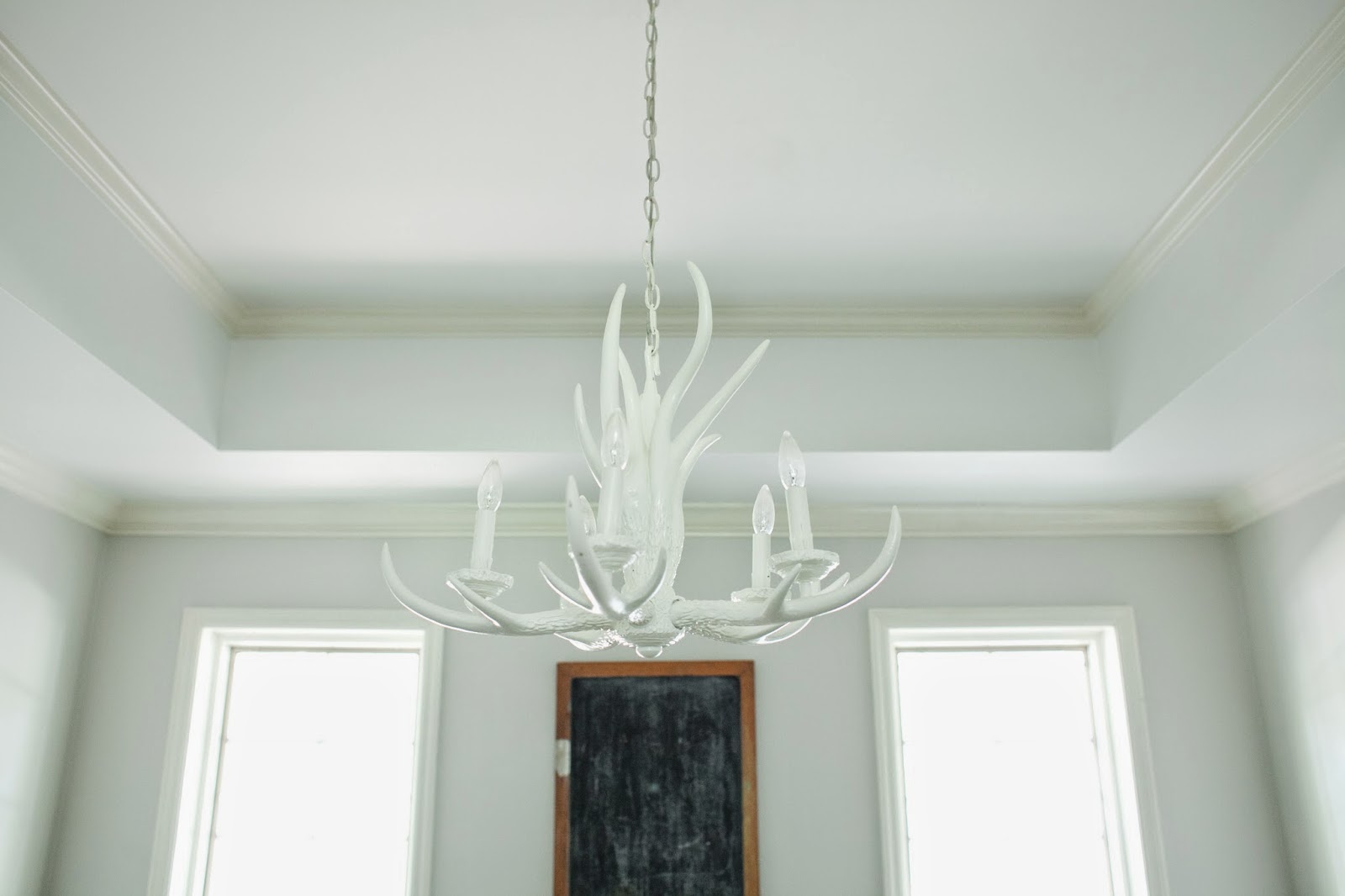 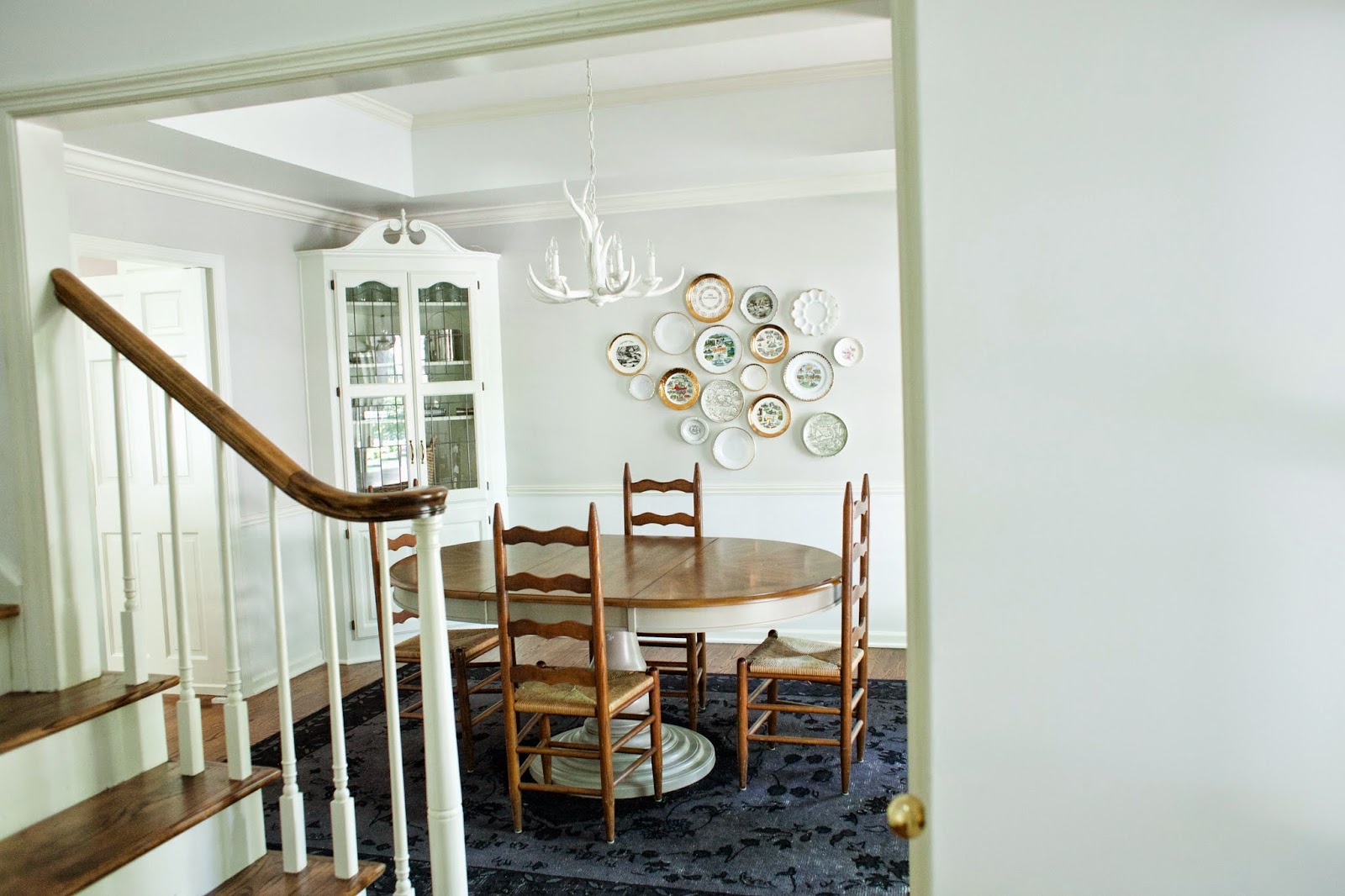 this is what you see right when you walk in the house, to the right. the "formal" dining room. because we need 2 dining rooms?! i don't love that concept at all. i will repurpose this room for something we'll actually use. eventually. i have big dreams for her to be functional...but first, let me have a baby. 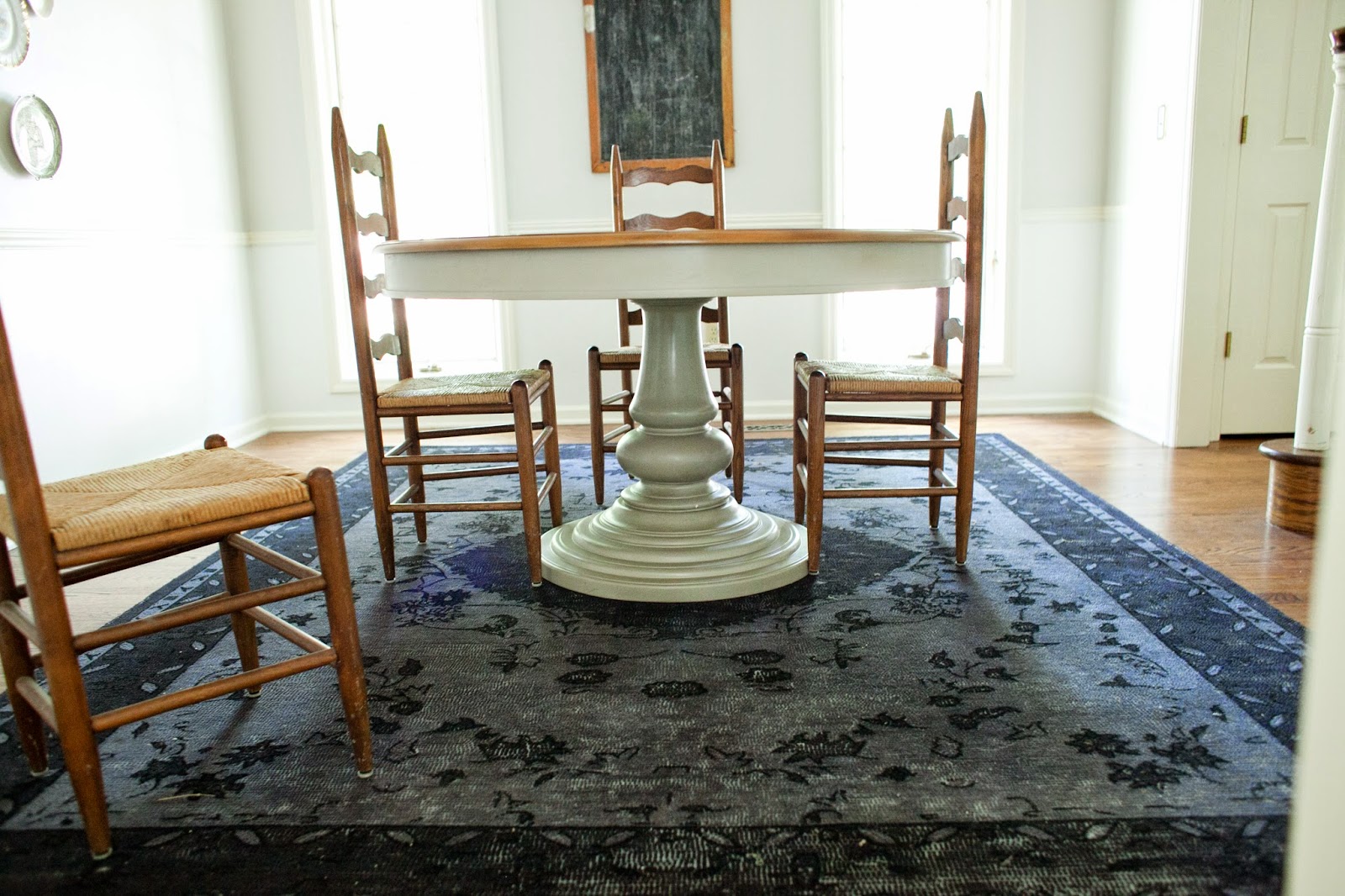 the base of this table makes me smile. we bought it at this discount place for way cheap in kansas city called cargo largo and then i found it online here for much more moola  i do love a good bargain.
the mira rug is west elm, but also from cargo largo on sale for crazy cheap...but it's online right now on clearance as well and pretty reasonable!
the chairs we found in the trash...tell no one of this secret.

since we're sort of in the entry, here's what it looked like before. 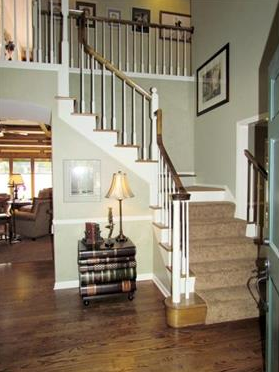 and here's the office to the left of that. the wallpaper was sort of textured, patterned grass cloth. we didn't strip it, but painted over it. i sort of like the texture. 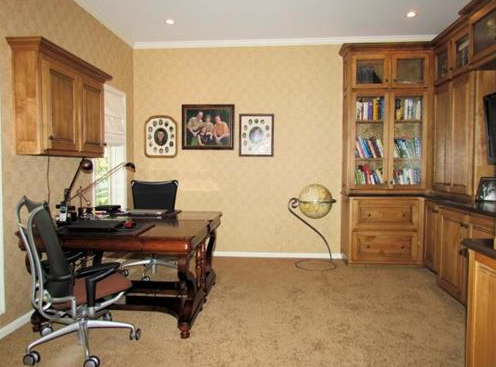 and after:  here's nato playing with the remote control helicopter layne got for his birthday. hmm, who's birthday was it again? ohhhh, an EIGHT YEAR OLD'S. 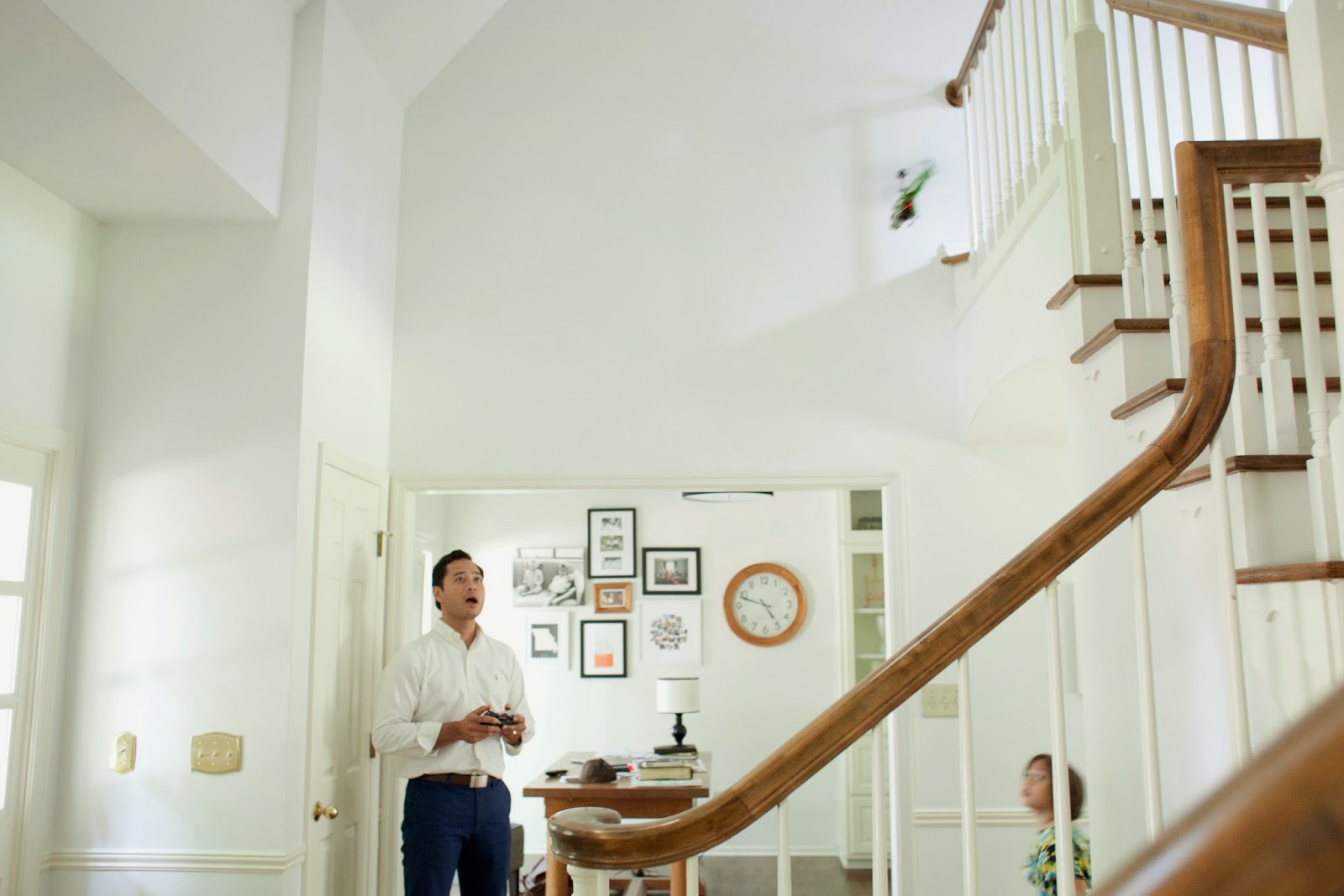 surprise! it's all white. and we painted those cabinets in the office white too. we took the carpet off the stairs(only to find that the wood is cut straight down the middle. weird. 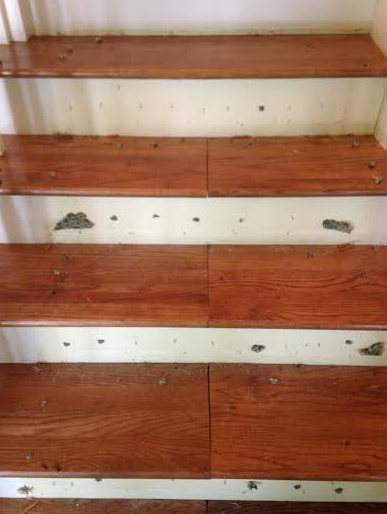 to replace it, we'd have to actually replace the banister and spindles and everything. soooooo, we chose a runner. much cheaper.
currently waiting for it to be installed later this week. i can show you pics of that someday... in more detail. when we're more moved in completely to the office and when the runner is in.
for now, it's perfectly livable and is shaping up just in time for me to fall off the face of the decorating planet for at least 6 months.

if you want to see the kitchen redo, you can go here