your toe must be amputated.

sometime long, long ago when i was a freshman in high school...before the mighty interwebs was at your fingertips(imagine it!), right about the time when computers seemed like they were really going to make something of themselves, my uncle got rid of old office equipment that he was no longer using.

a typewriter.
that was sort of fancy.
probably the last model before computers took over. so consider it the best of the best.
i don't want to brag, but it had a white-out button, which is pretty incredible considering backspace was new and complicated.

my dad thought we could use this machine to write papers. school things.
i of course got to work immediately. but on personal matters.
i had many things swirling around in my brain for some time. just waiting for the right moment (and the the right technology) to unleash it's powers.

i had noticed my brother hurt his toe in the swimming pool, his toenail was falling off and my mother had mentioned that maybe we should take him into the doctor. now that never happened for many reasons, one of which was that our family is too damn big. no one visits the doctor unless you have 2 out of these 4 happening: flames coming out of your eyes, bones protruding from out of your skin, your appendix has burst and now you're hallucinating, OR you're having a baby.

side note: most things can be fixed with a butterfly bandaid. and 2 skinny, but strong sticks. a simple tourniquet made of old bedsheets ripped into strips to secure the broken bone to the sticks... i always say.

i hadn't thought about this note, or any other note i typed out on that thing, until my mom texted me the other day, look what i finally found!
2 things: why did i write this note(didn't i have other cool things to do? no, i looked like the fourth member of hanson and was playing a lot of boggle in my basement) and why did my mother think it was worth keeping?
some parents keep drawings of puppy dogs and pretty flowers, mine kept this. 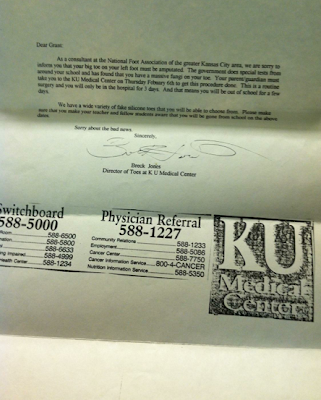 As a consultant at the National Foot Association of the Greater Kansas City Area, we regret to inform you that your big toe on your left foot must be amputated. The government does special tests from around the school and found a massive fungi on your toe. Your parent/guardian must take you to KU medical center on Thursday, Febraury 6th to get this procedure done. This is a routine surgery and will only be in the hospital for 3 days. And that means you'll be out of school for a few days.

sorry about the bad news.

and then i copied an ad i found in the phone book. because i'm a genius.
and maybe i could go to jail?

there are many, many good things about this letter.
a couple of questions:
1)what are these magical fungi toe tests set up in schools? are they still available to purchase?
2)silicone toes. at least they are paper maché?
3)was breck really sorry about the bad news? kinda seemed abrupt.
4)i like how simple breck's title is. no aires about him...just:  director of toes.
(not a question but i'm amazing at letters, huh?!)
5)is a toe amputation really routine? it seems...odd.

eventually, my mother told grant his toe would not have to be amputated and blaa, blaa, blaa.
of course they waited a 2 days as per my request just so the word would get out. it kind of made us all warm and fuzzy inside to know that grant would have to verbally proclaim to those closest to him that his fungus had got so bad, he was losing a toe. who would stick by his side, who would chastise him? only time would tell.

other terrible shenanigans with the typewriter include, but are not limited to:
1)sending someone a typed letter saying they got a record deal. this included a follow up telephone call where my voice was nasal-ee and pretty much amazing.
2)sending a friend a letter saying she had been caught cheating on her spanish test and would be suspended. please tell your parents immediately.
she didn't talk to me for 2 weeks because i "ruined her life". a little harsh, i thought.


father forgive me for i have sinned.

----
you can read about other horrible pranks i pulled on my siblings here.

Email ThisBlogThis!Share to TwitterShare to FacebookShare to Pinterest
Labels: stories about my dysfunctional family, this is me