just getting to haiti.

after traveling all day from kansas city to chicago, we got on the plane from florida to haiti. i was nervous. this is that last time i'd be in my comfortable country, land of the safe. we were delayed on the tarmac for over an hour because of a storm.

good, i thought. at least we're in america.

there was a line in there: "And, we’ve only got so much time, so let’s just decide: We’re done with the myth of safety. safety's just the mirage of the living dead. Do you really want to live or not?"

oh gosh. it's like God said that to me. i read it, but i felt like i heard it in my bones. 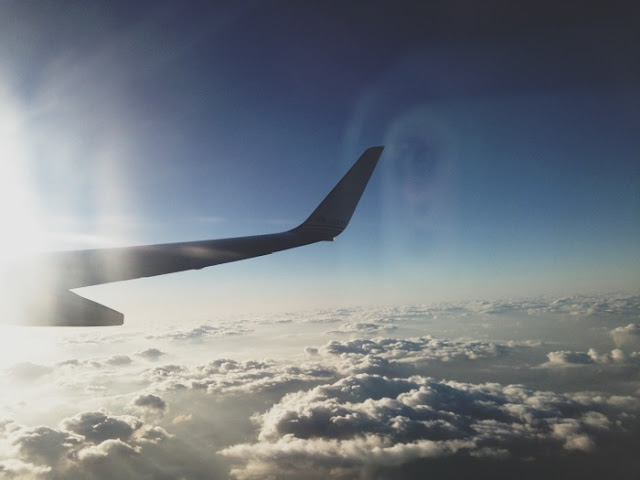 someone opened something smelling like a garlic festival on the plane and i already had a headache. i kind-of quiet-yelled, please! stop eating what you're eating! that was rude but i had been traveling all day and isn't it some sort of rule to not eat tuna or garlic situations on a plane, anyway? unfortunately, homegirl was sitting just one row ahead of us. she heard me and she did put the lid on it after 2 more excrutiating bites. but i ended up in the back of the plane, laying across three rows, trying to talk myself out of throwing up. asking for a sprite, but unable to drink it. texting a couple people...pray for me.

i did throw up for the next 30 minutes. not because of the smell actually ....i think because of my antibiotic pill i just took right before boarding. and bending over the toilet, i decided this was all really dumb. what was i doing? i could be at home in bed. i would at least be comfortable. i have a husband and kids to take care of, after all.

by the time we landed in port au prince, my stomach felt better. my good friend//angel, rachelle, filled out my forms and took my bag, handed it to me and said, just keep saying, "no mercí" when all the guys try and grab your bag. you can do this. 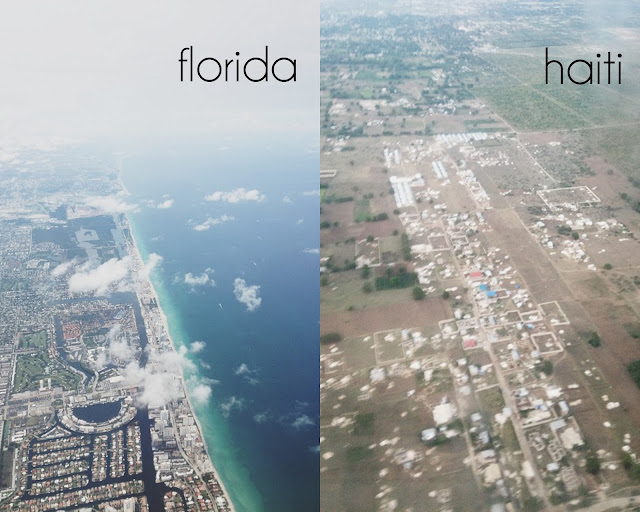 (my contrasting airplane view...haiti is just 2 hours away from the beautiful coast of florida and it's night and day.)

i looked out the window.
eff.
what did i get myself into?

i could see the poverty from the air.

the airport was certainly not like america's. rachelle hugged some guy. oh. i think this is our translator. i remembered rachelle saying, guys, you'll love Volci(vole-see). he is not our translator, he is my brother. and as soon as we hit doors to the outside world... chaos. we shuffled to our bus and greeted the driver and the body guard with about 25 men yelling and talking and trying to take our bags. just get on the bus. just get on the bus. it's safe there.

but i didn't feel safe there. by the time we hit the streets, it was dark out. there were no lanes and lines on the streets. everyone out, selling things. busy. motorcycles zooming in and out between cars. people crossing the street and not seeming concerned that we almost hit them. 10 people squished in the back of tiny trucks that were painted all crazy. i think those are taxi's? trash everywhere. sometimes trash piles on fire.

what are they all doing out? i had never seen anything like it. there was absolutely no order. everyone was selling something in makeshift tent stores. the cinderblock buildings in the background looked like they were in shambles. are these places even livable?

rachelle says, it never shuts down. maybe the wife works during the day then the husband works at night. just over and over. no buildings are finished. if they're finished, you have to pay taxes.

this is not safe. why did they tell us to come here? why did no one tell me?

we finally got to the hotel. the large metal gate was opened by 2 security guards with machine guns around their necks. the gate was promptly closed behind us. there were giant walls, hovering tall around the hotel. then barbed wire was on top of walls. 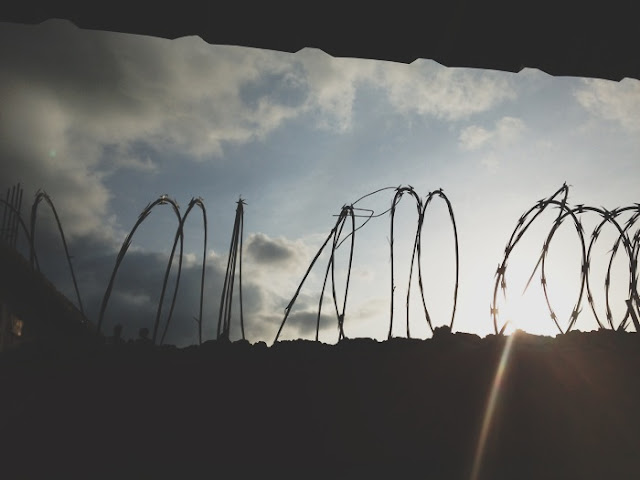 we went up the stairs to our room. it was all very, very simple. concrete walls, some beds. 3 or 4 to a room. no blankets. just sheets(it's hot). a pillow. it would be a bad motel in america,  but after seeing what i saw, i realized it was a palace in haiti. we had security,  running water, and there was an AC wall unit.

we shooed some bugs out the door. and i laid on my bed. dogs were fighting behind the hotel. i knew i wouldn't sleep.

i was scared and i wanted my husband, at least. at least! he could protect me. but i was alone. Lord, help me. i want to just be here and enjoy my time. not limping through it, scared. Lord! help. 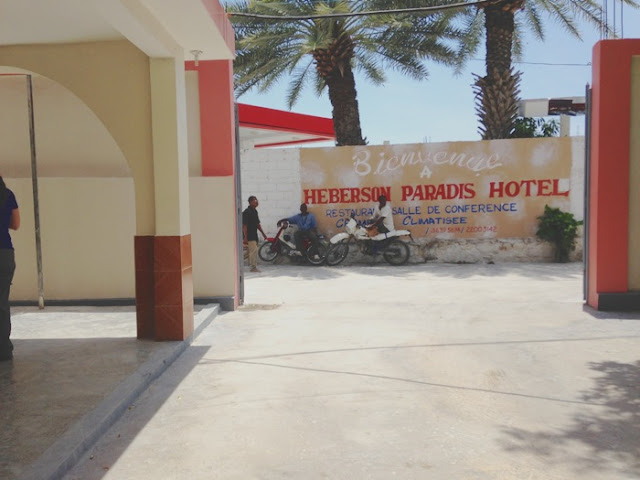 am i enough for you?
i am in charge of your safety, even here. do you believe it?

and then that quote hit me again. safety is a mirage of the living dead. i have lived thinking i am in control of everything. i was dead in my comfort. it kept me from living.

sure enough, i didn't sleep well. i thought of machine guns and people climbing into my window. i heard the dogs all night and the roosters crowed at 5 am. so much for sleep.
breakfast was rolls and then some sort of sloppy joe-ish (but not sure) mixture for in between. with a side of bananas. i chose a cliff bar from my back pack.

we left at 7:30 to travel to gonaïves. a 3 hour trip to the orphanage we would be at for the next 3 days.
tired, scared, uncomfortable. hell for a comfort worshipper.
and so there we went. i didn't know it quite yet, but i was heading for life change. for heartache. for joy. for eyes opening. for real adventure: not thrill seeking and not whimsy. completely unglamorous and completely humbling adventure.

david powelson says, The  real  adventure  takes the  path  of  weakness,  struggle,  endurance,  patience,  small  kindnesses  done  well.  The  road  to  excellence  in  wisdom  is unglamorous.  Other  people  might  take  better  vacations  and  have  a  more  thrilling  marriage  than  yours.  The  path  of  Jesus  calls forth  more  grit  than  thrill.  He  needed  endurance  far  more  than  he  needed  excitement.  His  kingdom  might  not  cater  to  our cravings  for  derring-­do  and  thrill-­seeking,  but  "solid  joys  and  lasting  treasures  none  but  Zion’s  children  know."

that afternoon, we drove to the orphanage and school. children opened the gates and laughing, chased the van until it finally stopped. the van door slid open and immediately, like magnets, i had 3 children stuck to various parts of my body.

looking at an orphan in the eyes does something to a person. and right in that moment, it was worth it. the throwing up. the forever traveling. the bumpy roads. being unsafe and uncomfortable.

none of that mattered anymore.
Posted by Jami Nato

Email ThisBlogThis!Share to TwitterShare to FacebookShare to Pinterest
Labels: haiti, thoughts about God