listen, i never grew up celebrating halloween. i take that back we actually celebrated halloween under the disguise of not celebrating halloween. so fitting right? christians dressed up as "not participating with those pagans"... but were actually doing the exact same things.  our healthy alternative was a carnival of sorts called "lord of the harvest". the title is amazing. go ahead and laugh.
sometimes people would dress up as witches or something dead and we would all be appalled in our hearts. don't they know? this place is for christians! ahahaha... it makes me laugh. it could have been a really awesome outreach probably. but no, we turned inward, called it satanic, and shunned the world.

now friends, when i had kids, i was like...hold up,  this is actually fun and cute and we get to hang out with our neighbors. AND, get this...we weren't worshipping the devil. some of you are offended at this point. but i will say, i respect your convictions and i'm not here to pick a fight. this is the story of our family and our traditions. and sometimes, people change.

me. i changed. because i used to not celebrate and now i do. whew! glad i explained all that...

lila was a speech therapist this year. what? yes...she was. we asked her what she wanted to be and she yelled, CECE! which is her best friend and speech therapist at her new awesome school. i'm not sure if she knew what she was saying but nato and i looked at each other and said...this could work. i cut up some of nato's old scrubs and my mother in law sewed it back together. the glasses are from the dollar store and i took the insides out. 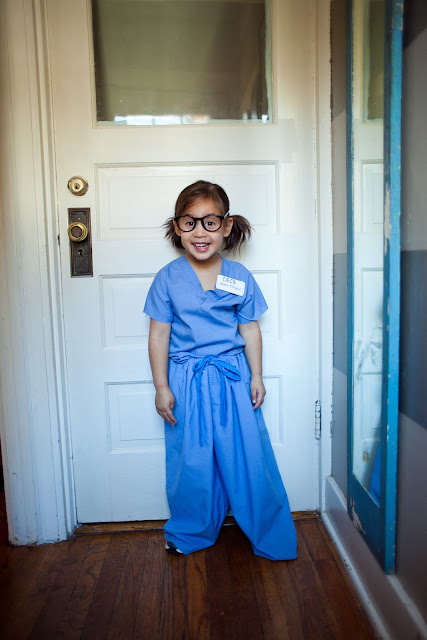 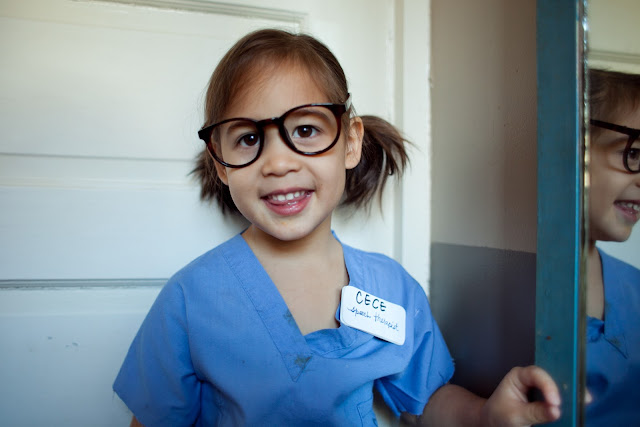 when we told cece that lila was going to be her for halloween, she decided she should be lila. 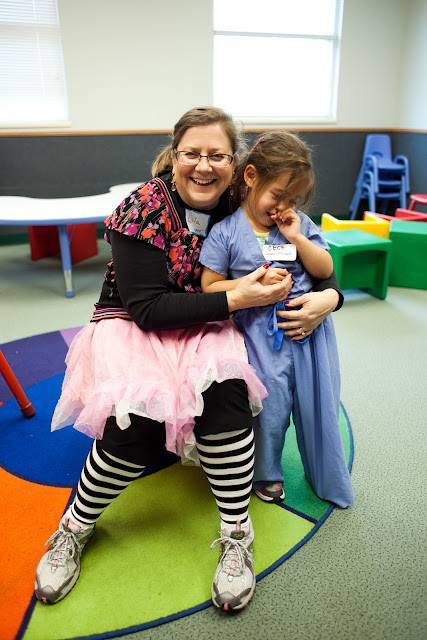 you're like, what is cece wearing? lila dresses very colorfully. she often chooses mismatchee items and sometimes i wrangle it in, sometimes i don't. but her style matches her personality. 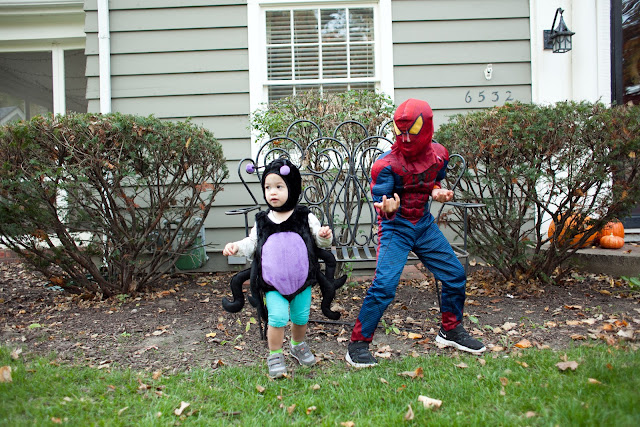 layne was spider man and penelope was his pet spider. at least this year, penelope isn't wearing a costume made for dogs. i think. actually i don't know. 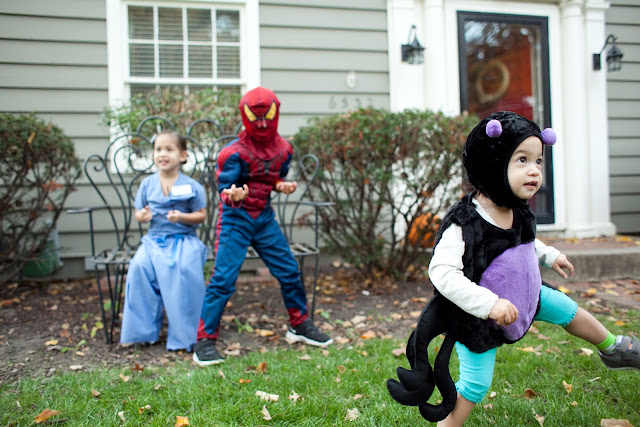 penelope will not stand anywhere for more than 1 second.

now layne earned his costume this year, as i didn't want to actually buy another costume for him. so homeboy did a lot of extra chores and BOOM. hard work pays off, my man.

just ask your cousin isaac. drinking milk has paid off for him as far as weight gain is concerned. is he not the absolute cutest thing you've ever seen? 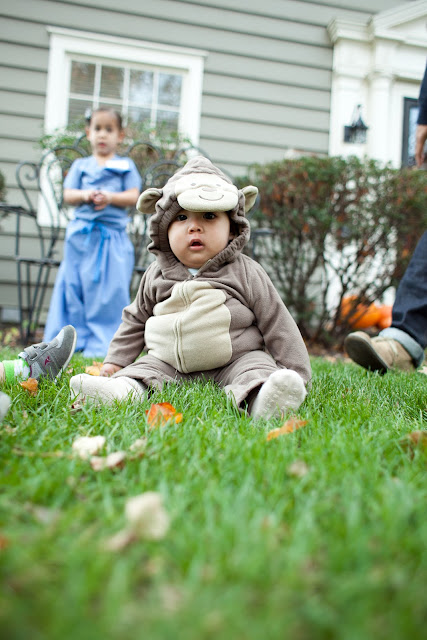 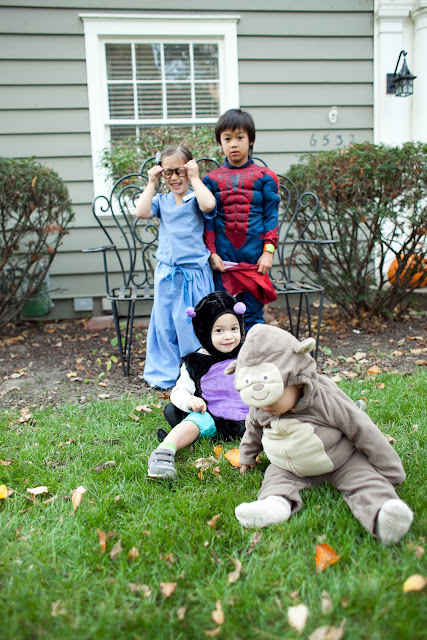 no one is participating the way i was yelling for them to. it was really rude and i won't stand for it.
what i will stand for is a baby dressed up as a barista. thank you, poppy. 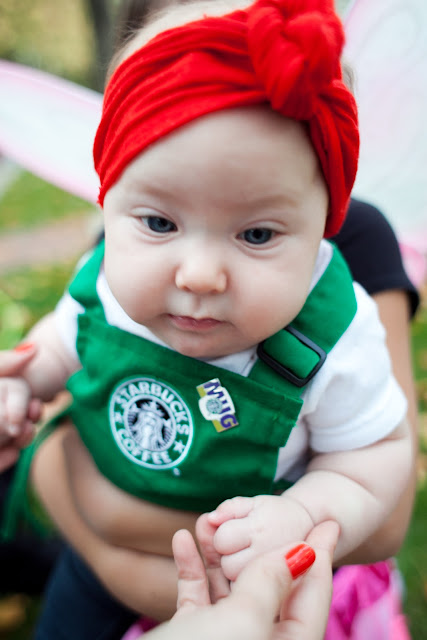 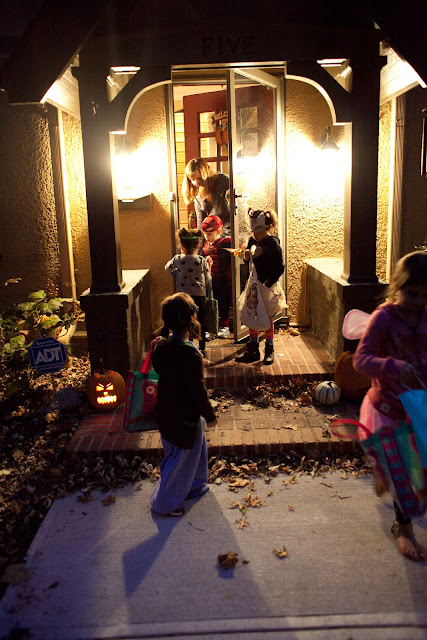 lila was so sweet when she was trick or treating. i mean, home girl has basically no recognizable words. except she would yell, YOU'RE WELCOME! after she took candy from each house. it was too hilarious. 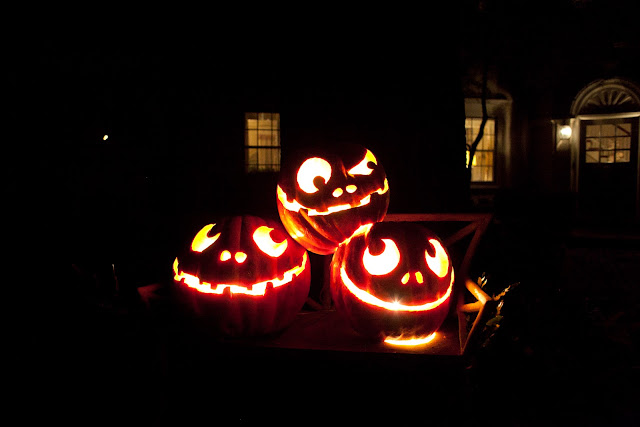 these are real pumpkins that someone carved, btdubbs. omg. why did i even put this picture on my blog? not sure. i'm chocolate drunk though. it's sad when you eat so much of your kids chocolate and then wake up through the night with a touch of heartburn. thanks for all the snickers, neighborhood.

Email ThisBlogThis!Share to TwitterShare to FacebookShare to Pinterest
Labels: holidays