my sister, audrey, and i have the uncanny ability to make children a couple of days apart from each other. thus, we enjoy the "double party" often. you may have noticed. why not do double parties while your kids are young and have no say in the matter? it's cost efficient and less stressful when you have a sibling (who is also a hermit) to carry the load of extraverting oneself with you.

first off, this day was actually a triple party because i threw my husband a birthday brunch. why did i do both parties on the same day? because i'm a dumb-dumb. 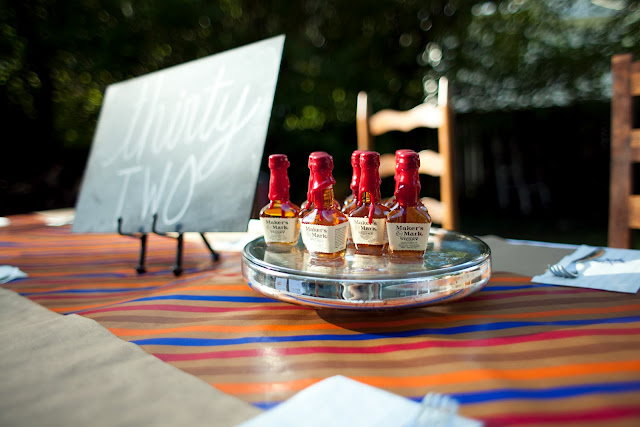 aren't these little whisky's the cutest? even grown men like party favors.

moving on! let us enjoy the goodness of fall as june turns 1 and lila turns 4. it's hard to believe that these 2 are cousins, as they look nothing alike. but i have come to terms with the fact that i don't even look like my family, so this is neither here nor there. or some cliché like that. 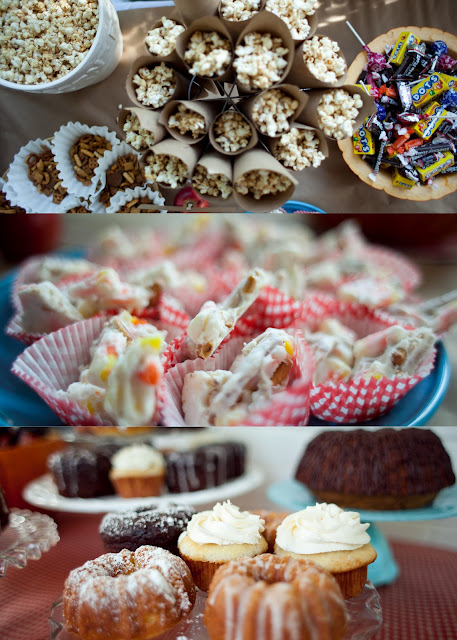 so we made all sorts of fallish foods.
let's all take a moment to acknowledge that bundt cakes are kind of hard to make because you can't get them out of the dang pans unless you basically grease and flour them 12 times. we learned that after our first set bombed. some will say this is common knowledge found on the interwebs, and to that i say, no one asked you for your opinion. mkay?

let me just toot audrey's horn too. how cute is the signage put into an apple? yes, that was a last minute addition too. you should know that all of our parties are jimmy rigged. 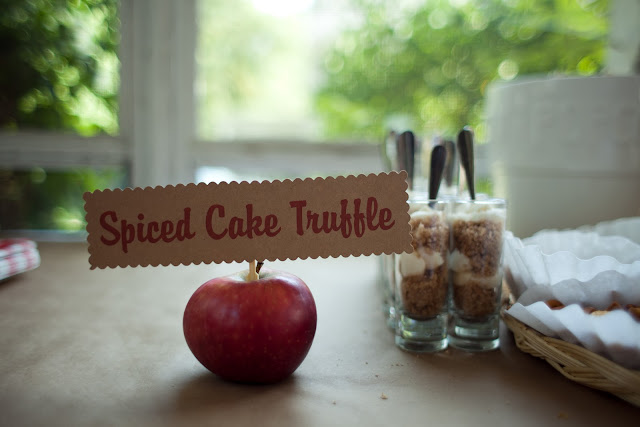 not pictured are the classy corn dogs. 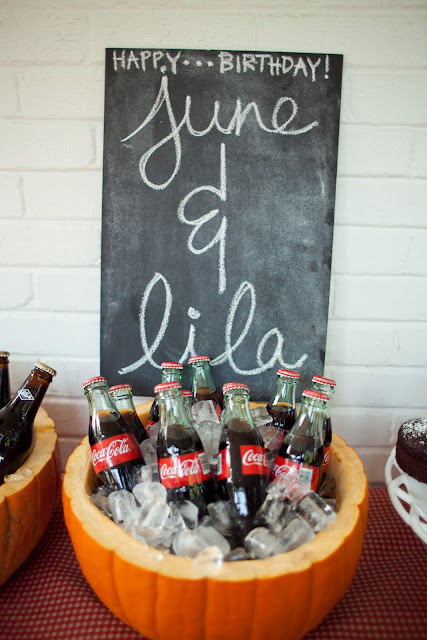 drinks in a pumpkin, anyone?
well that's the only way i drink my coke's in the fall. 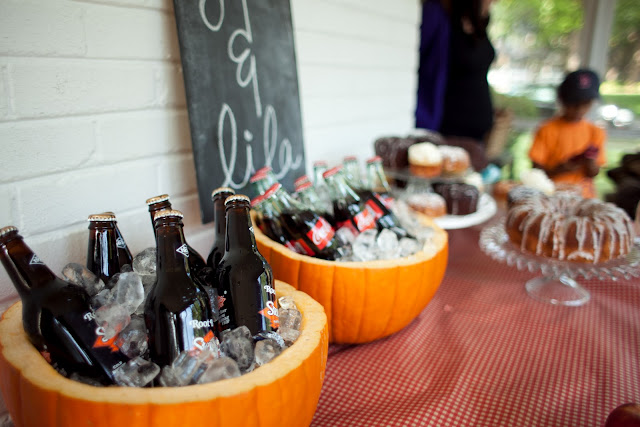 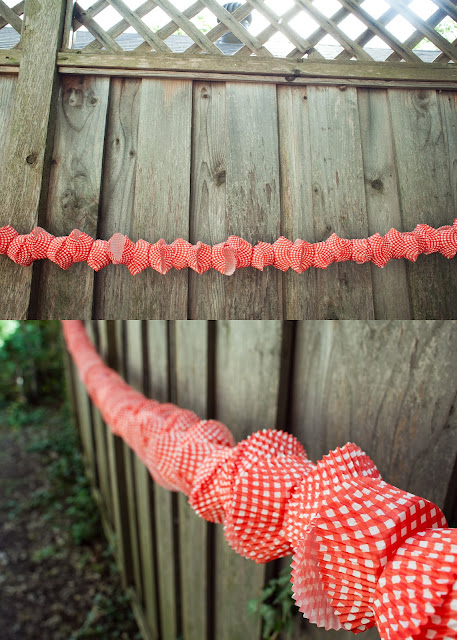 audrey made cupcake liner garland by simply threading sewing string through each one. painstakingly at midnight the night before. 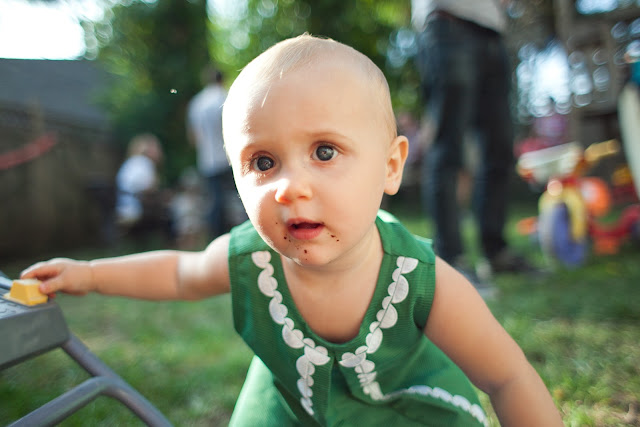 oh, hey june. isn't that a song? no, that's wrong. anyway...why are you eating dirt and your mother doesn't care? oh, it's because she's throwing a party. carry on. 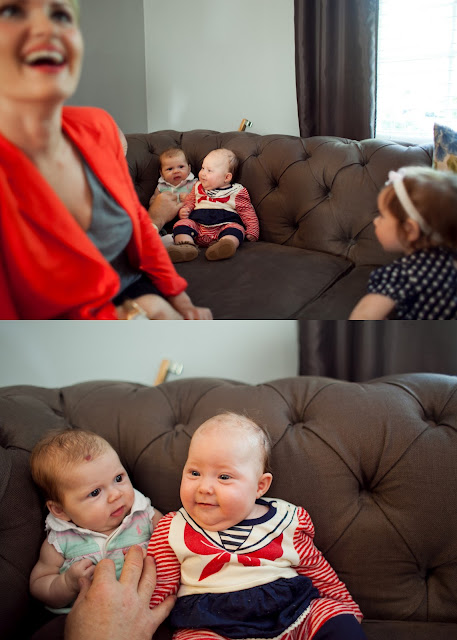 look at these two chunks. just look at them. wrist rolls and double chins. it's only cute when you're young, ladies. rock it while you can. 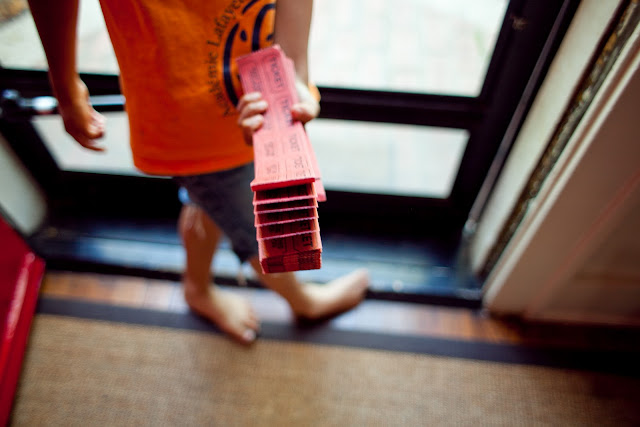 ok let's move on. party games. it's a fall festival so you'll need tickets. luckily, no one really actually cared about the tickets and just did what they wanted. that's ok. i don't care about rules either. 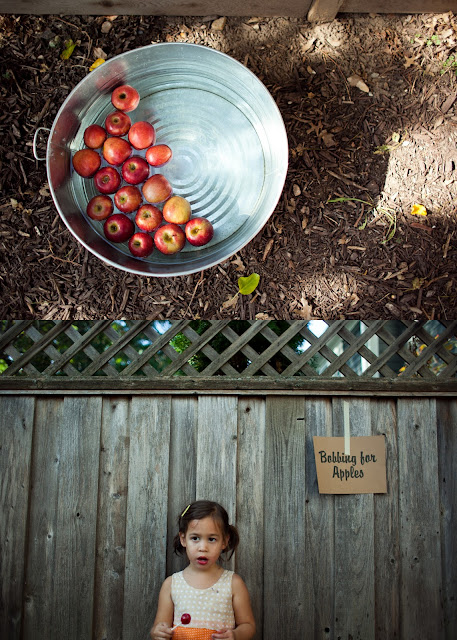 as you can see here, lila is ecstatic about bobbing for apples. happy birthday, child! 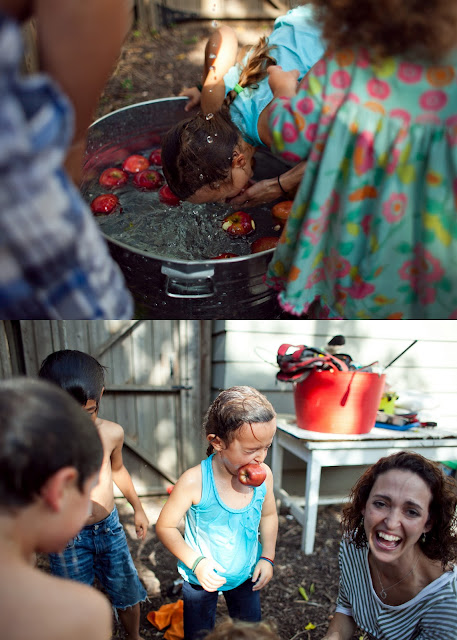 the game was a big hit with the kids. surprisingly. i kind of thought no one would play it.
but they were actually really die-hard competitive. people cried. 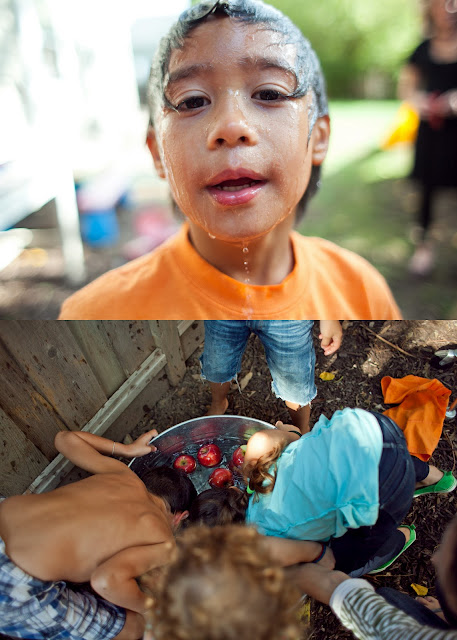 it was very sanitary, i'll tell you that much. 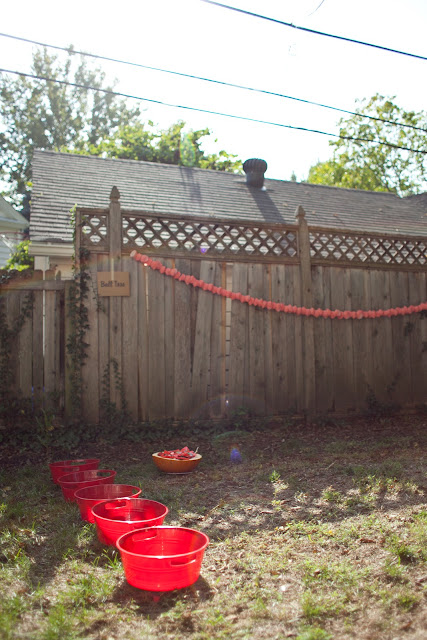 there was a ball toss as well that maybe 2 people did. it was a big hit for those people that tried it. 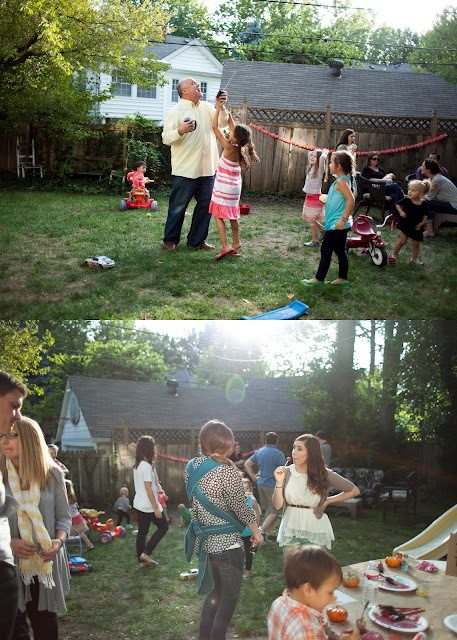 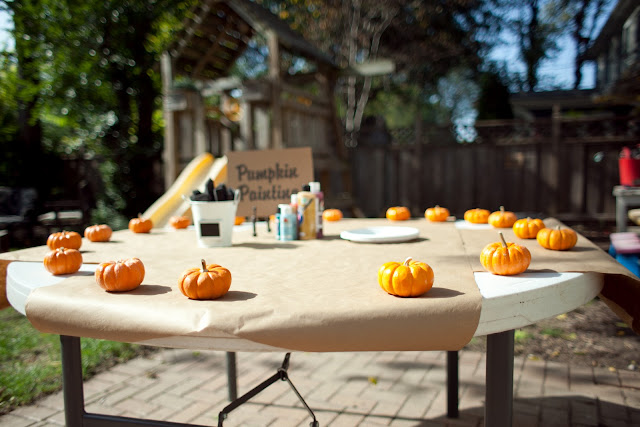 we did some pumpkin painting. and by that i mean, some kids painted pumpkins and then lila repainted all of them with gobs and gobs of paint that will dry in 2 years. i think they call it "curating". 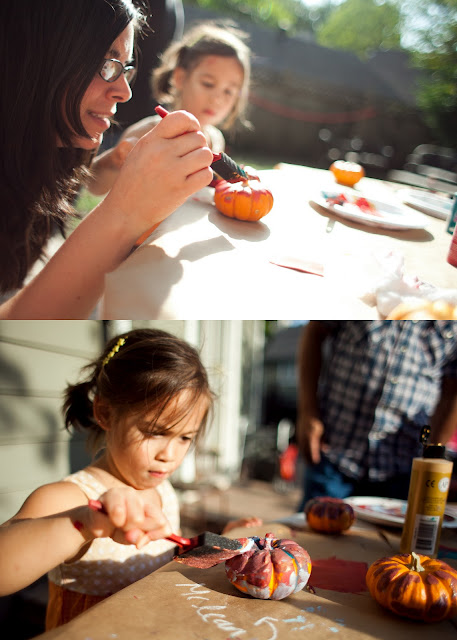 june was just living life as a lone orphan in the woods, eating whatever was thrown to her by merciful passersby. as she was eating the corn dog, a double rainbow appeared. like her mother, she loves these eyelids and pig tongues wrapped in a breaded product because they produce a happy drug-like feeling. i choose to say no to this satanic experience. because real meat is out there, people. it's out there. 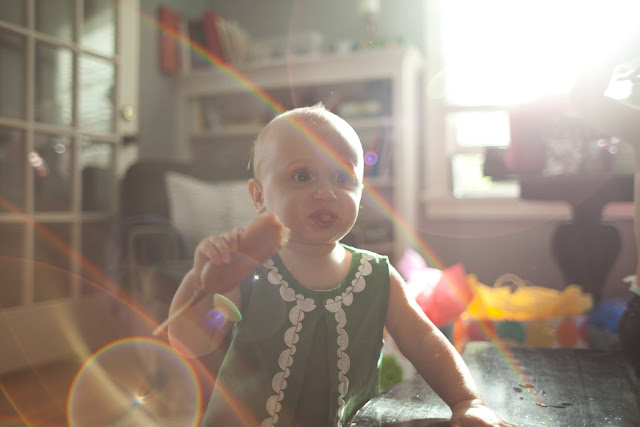 basically, if you look at this picture below, you'll agree with me that we're a classy family. 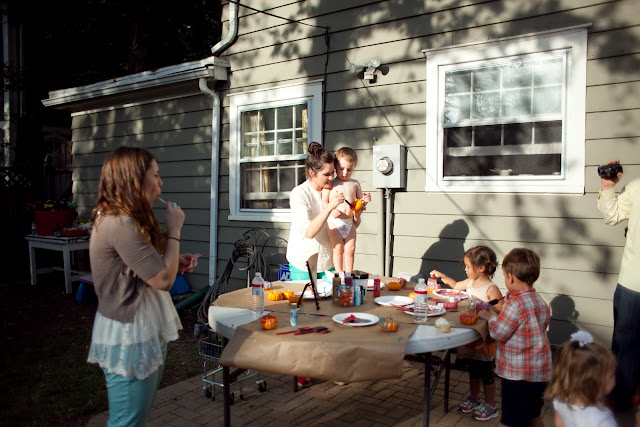 at the end of the day, everyone got sick from bobbing/eating/snotting/foot bathing in the bucket of apples.
you're welcome. 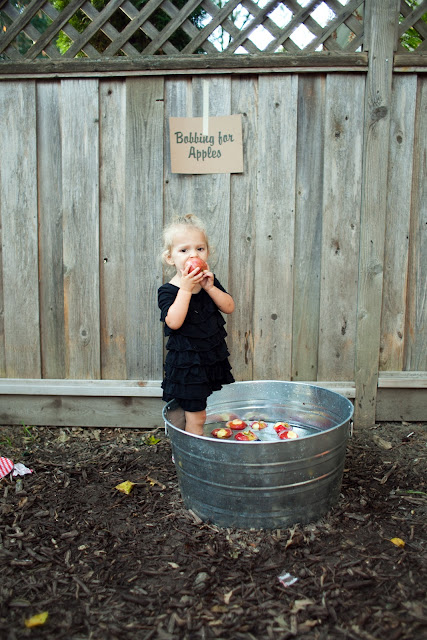 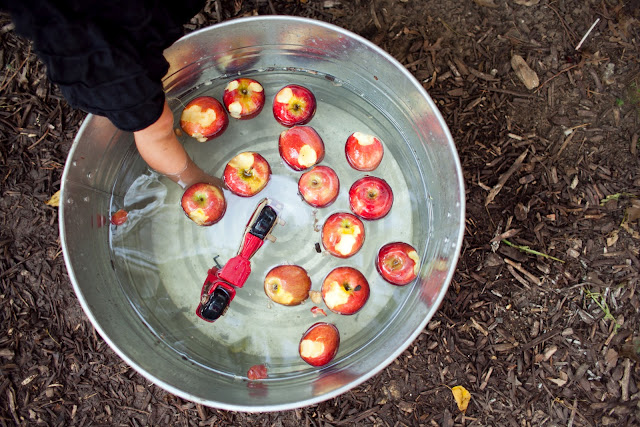 on that note, don't forget your party favors! they are filled with emergen-c, since you're kids are for sure going to have a cold. 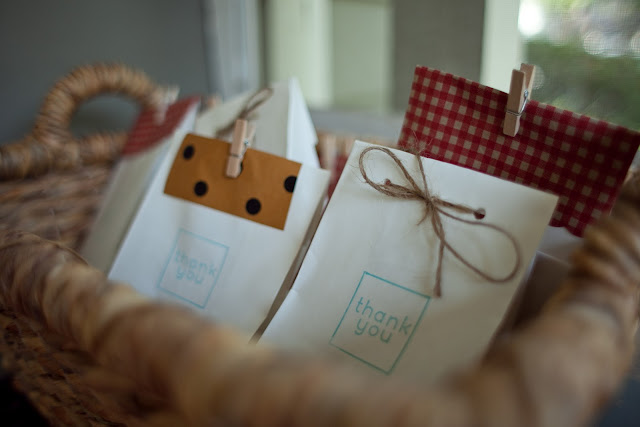