first of all, this post is all over the place. welcome to my brain. nextly, for the 4 lucky ladies who left comments on my last post, i am making you a little clip on rosette flower-ee thi 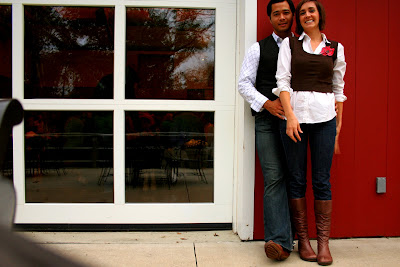 ng that you can clip on to any cardigan or shirt in a jiff and look totally snazzy. i am modeling one i wore to a benefit for house of hope KC. jenn, heather, and kristen, i'll give you yours at church in the coming weeks. erin, i'll mail you yours or something. so fun!


moving on, should my blog be called "adventures in applique"? i swear, this is getting ridiculous, but it's my new favorite thing as far as crafting goes. i made this shirt for layne's cousin who is having a birthday. layne immediately asked if it was for him and was really sad when i said, "no layne, i made this for a robot that lives on mars and eats children." he had no interest in the shirt after that. just kidding, i didn't say th 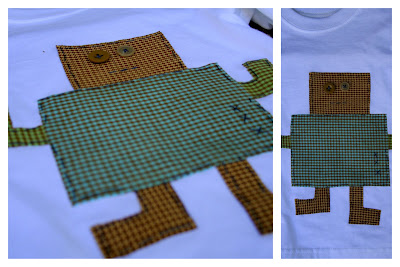 at. and i will be making him a robot. in ALL blue apparently...that's what he keeps asking for. a day will come when sewing layne's clothes is not cool. at all. so i'm going with this for now.

speaking of layne, he eats healthy items sparingly. which means while he's in this house, he doesn't eat a ton. so i have to sneak healthy things in his food like, oh, most of the time. his version of juice is hilarious--blueberry puree, 1 tsp flaxseed oil, 2 juice plus capsules, 1 probiotic capsule and a lot of water. i've tasted it and it is nast-ola. but whatev. sometimes i even throw in pumpkin puree. i just threw up in my mouth.

so i found a new recipe on wholeliving.com(a martha stewart site) called sweet potato brownies. at first i thought they would be gross, but then, after eating the 15th one, i decided the 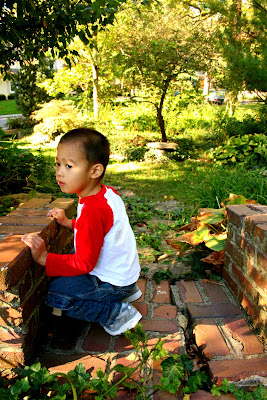 y were incredibly delicious. and they passed the stringent layne tastebud test, so you know you'll like 'em. here is the recipe:


Heat oven to 350 degrees. Butter an 8-inch square pan; set aside. In a medium saucepan over low heat, melt butter. Remove pan from heat, and stir in cocoa.

Let cool slightly.
Meanwhile, in a small bowl, whisk together flour, baking powder, and salt.
Stir in sugar and sweet-potato puree, then egg. In a small bowl, stir together vanilla and coffee until coffee is dissolved; add to cocoa mixture.

Add flour mixture to cocoa mixture and stir until no traces of flour remain. Spoon into prepared pan(i put mine in a mini cupcake pan); smooth the top. Bake until surface of brownies looks barely dry and an inserted knife comes out with a few moist crumbs, about 20 minutes. Cool to room temperature before serving.