where the wild things are: preschool

our day started out in typical fashion; lila was eating leaves and layne was trying to ride her. they were both happy. one was happy to be going to preschool and the other just happy because she is a kaola bear. 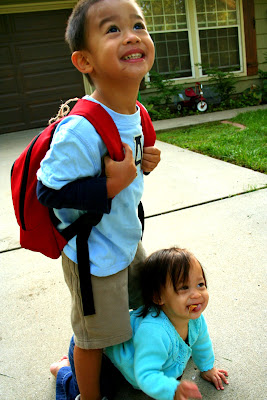 once again, as seen in the pictures, layne was being his typical self--bossing nato around saying, "it''s time to settle down, daddy. n'kay? we need to settttttttle down." he heard it from a mom standing next to us and then repeated it to us of course.

so everything felt like it was going to be normal. until layne entered the class and immediately went to the binoculars and magnifying glasses--which he is obsessed with. he loves goggles and sunglasses so this doesn't surprise me. the teacher was coralling the children to circle time and when she came to gather layne, he let out a pterodactyl scream in defiance. i was about to rip the binoculars out of his claws and give him a good old fashion pinch, but the teacher said with a smile, "maybe he'll do better if you're gone."

point taken. so i leave. but i peek. and there he is in the middle of the circle with all the kids sitting down around him--with the sour-i-est face i've ever seen. it was a half mad, half scared monster face. 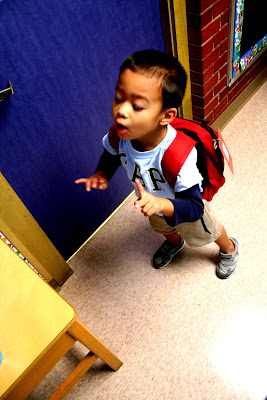 i left feeling concerned--but talked myself down. he'll be fine. he always settles down. drown your worries at hobby lobby. so we went crafting.

at 11:00(an hour and a half after i dropped him off, mind you) my phone rings. it's the preschool of course. layne is having a hard time--he pottied through two outfits and is crying outside on the playground. maybe you should come early.

when i arrived he was on the playground, under a patio table laying flat on his stomach...screaming. when he ran towards me i noticed the glaring pee splotch on the front of his sweat pants.
i'm holding lila, trying to hold layne and console him too...slightly sweating and feeling terrible for the teachers. but mostly for layne. he was so nervous and overwhelmed, he peed his pants. and then he probably was so mad about peeing his pants that he peed them again. the humanity...

and since we're talking about first's...lila ate her first handful of dog food this morning. these are the times when you thank your culinary convictions that made you pay big bucks for organic dog food --which doesn't contain weird animal parts and trash swept from the dog food factory's floor, mmm-kay? research it. 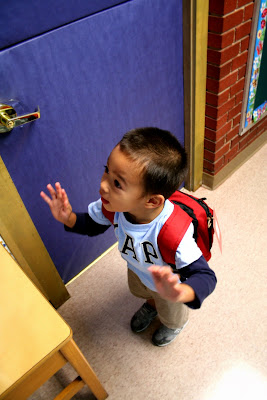 so let's recap my crappy day:

so ya, i feel like i suck as a mom and a dog owner. but it was funny at least and i can tell layne's future girlfriends all about this. boo-ya! 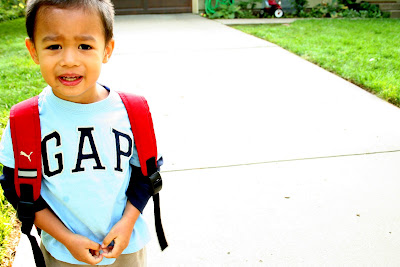 Email ThisBlogThis!Share to TwitterShare to FacebookShare to Pinterest
Labels: layne