bring out the walker with tennis balls! 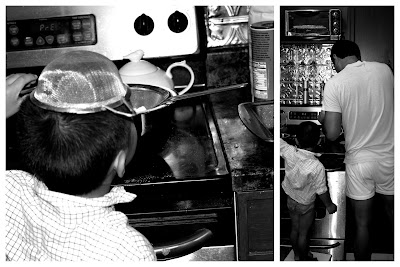 and and 30 years closer to brain loss (i'm planning on losing my memory sooner than later). but whatever, let's not dwell on the negative. the positive is that nato and layne made me a 4 layer carrot cake from scratch while i laid around and ate cheetos. the natural kind, people...i don't go completely over the edge on my birthday. seriously. but ya, so impressed with my husband.

and the cake was good too. the best part was when i came home from some shopping and my husband was still in his underwear, holding lila, slightly sweating, and trying to bake and clean for my birthday party...just looking like he was going to go crazy. i said, "how has your day been" and he was like, "lila has been so needy, layne has been naughty and i'm trying to get all this stuff done for tonight!" that really made my day. he was getting a taste of what i do everyday. i mean, he even sounded exactly like me. and he was still in his underwear at 2pm. glorious. i have to give you props again, babe...that was awesome. but i still like my job as a mommy and i don't want to toot my horn, but i think i am better at it. toot toot!

my mom made the cutest cupcakes as well and we used all layne's leftover football party plates and napkins...the flowers were from 2 weeks ago and still looked good! sam's club h 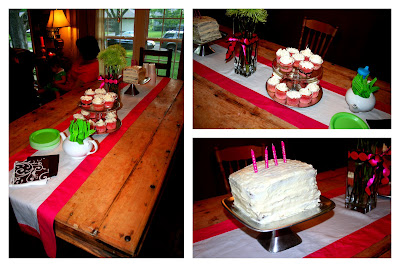 as the best, cheapest flowers by the way.

and here i am, the fabulous birthday girl, with a glass of sangria in hand while blowing out my candles. then layne started crying because i blew them out and he didn't get to help. so they song was sung twice--which was terrible. it sounded like a bunch of drunken sailors in slow mo. it's the thought that counts though, ri 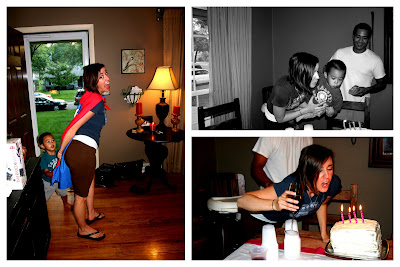 ght? and i have no idea why i'm in a cape showing my booty. i had 3.5 sips of sangria and was feeling frisky, what can i say. don't feel bad because you weren't invited...it was just family. be glad you weren't there. you wouldn't believe the topics covered in conversation while eating cake.

so now you have to leave me a comment and tell me how terrible you feel for forgetting my birthday. scratch that, i probably already forgot your birthday so we'll call it even. sorry em.

Email ThisBlogThis!Share to TwitterShare to FacebookShare to Pinterest
Labels: party hardy, this is me